Lilystars Records and partners NU107 and the Ayala Museum are proud  to present The POP Shoppe! Music Series: A Call To Mind. This music event series running from August to December 2010 is a monthly showcase of the freshest, the finest and the most significant indie pop music in Manila. First off in this series of five events is “IT STARTED WITH AN APRIL SHOWER” – the EP Launch of The Gentle Isolation.

The Gentle Isolation is an indie/twee pop quartet from Meycauayan, Bulacan, composed of Ness Urian (vocals/acoustic guitars), Joseph Rovero (electric guitars), Monch Cristobal (bass) and Bachie Rudica (drums). They started out as a New Wave cover band before reformatting in 2009, officially redirecting their music and finding their sound to become artists churning out their very own songs and leading them to an opportunity to partner with Lilystars for their releases.

Their debut EP entitled “It Started With An April Shower” is all set for release at the Ground Floor of the Ayala Musem on August 18, 2010, headlining The POP Shoppe! Music Series. The event will also feature support performances by The Camerawalls, Your Imaginary Friends, Outerhope and Kate Torralba. Below is the The Gentle Isolation’s promotional single entitled “Let’s Go Slow“.

Experience the sound and the vibe for only P550 which includes The Gentle Isolation’s FREE CD EP and a complimentary tour of the Ayala Museum before the event! Tickets will be available beginning August 10 at the following stores: A Different Bookstore (Serendra), Powerbooks (Greenbelt, Glorietta, Trinoma, Shangri-la Mall and Alabang Town Center), Jorge’s Portrait Studio (P. Tuazon, Cubao) and online via E-Ticketing (EventBrite.com).

We are now accepting pre-orders for “It Started With An April Shower” by The Gentle Isolation! If you place your order today until August 17, we’ll throw in another FREE CD!* To hear clips of all the songs from The Gentle Isolation’s EP and pre-ordering details, click HERE.

Watch out for details regarding where “It Started With An April Shower” will be available for purchase beginning August 19! For real-time updates, add us up on Facebook (Lilystars Records; The Gentle Isolation). You can also see what we’re up to at http://lilystars-records.com and http://thegentleisolation.com/ and receive updates by joining our mailing lists. 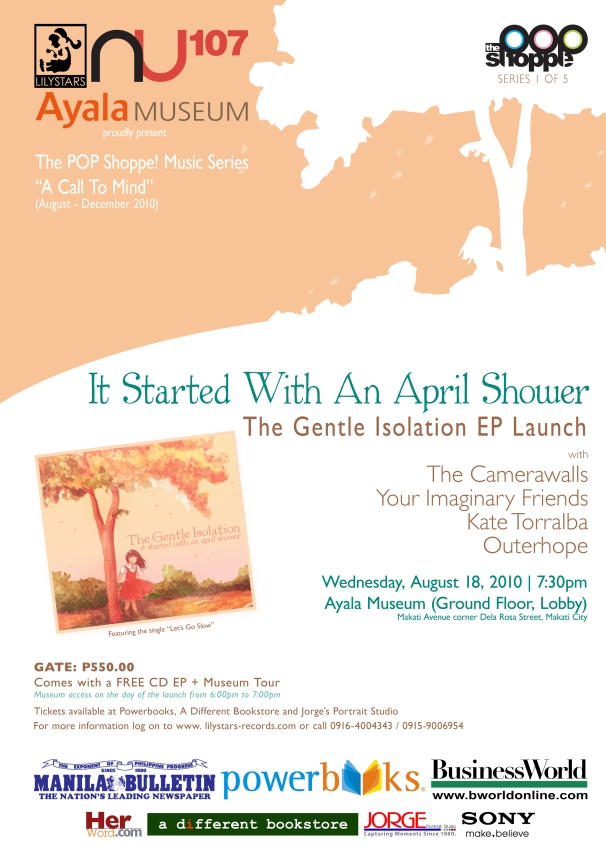